Since I’ve started learning French language. When it comes to learn foreign language, understanding its culture is a real big part! so I traveled many different French restaurants, bakery, dessert café under color of studying French and I think now I have normally taste in French food. In Korea, there are lots of bakery pretend to be French but there are few numbers of places in good. I admitted that I found a fine bakery really good!

I stumbled upon this bakery in Hongdae at the beginning of this year, recommended by many other friends especially Masy last week at Ruby Edwards’ Tartine, Itaewon. She was happy to know a pie dessert café but seems like she misses another café located close to her office, it’s called ‘Publique’ near Sangsoo Station. It’s quite hard to find the way  because the bakery is tucked away down a backstreet. Publique is a conversion of family homes into a bread factory. Despite of bad location, many people visit to buy their tasty bread. Publique serves pain de seigle in French. Whole staffs are proud of their seigle, they are the only one who bakes 100% rye bread, a whole wheat. They also makes Nanterre-style brioche, ciabattas, tartines, cannelés bordelais, viennoiserie and meringues. However, I can clearly tell the best is éclairs. They have the best éclairs ever I’ve ever had in Seoul! Absolutely the best compared to Eric Kayser, Pâtisserie Michot, PAUL, Amandier, Guillaume.. It was really well done. 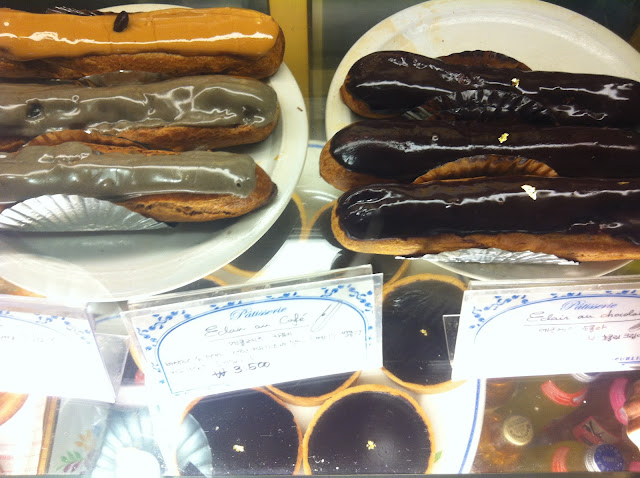 Normally, there are three parts to éclairs: the pastry (pâte à choux), the filling (crème pâtissière), and the topping (chocolate ganache). All three parts are well made, I love the filling made of Valona chocolate in particular. You may don’t like moist pastry who are used to crispy texture but I liked it, this taste means it’s fresh assembled. I really enjoyed it! I’ve heard like it’s been a year since this bakery has been opened. It goes without saying the place became popular and popular and very often ‘Sold out’. My friends worries about this euro standard bakery so crowded. Nevertheless, I hope this place are more popular in Seoul. I would be so pleased to hear the opening of its second location in hopes of being popularized like the meaning of this pâtisserie, publique.